The advertisements seen on this blog are in no way connected with my interests, activities or beliefs. What you see is the result of the effort of Wordpress creators to keep this place relatively free for all sorts of bloggers.

whatever it is about

apparently, i am not very social. however:

in the synoptic gospels, there is this narrative about John the Baptist standing in the river of Jordan and calling out to all people to stop in their tracks, think of what they are doing, and repent of their evil ways (Mt. 3:2-3etc).

John was no softie. he’d grown up in the desert. he knew how to forage for food in barren places. he could sleep on bare ground, go without water and food for days, walk long distances and speak of things as they were. he was a strong man, a man of God’s justice and mercy, but justice first. 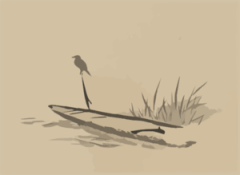 and this man, this strong, self-sufficient, hard man once stood there in the middle of the river, speaking his usual words of repentance, snakes and coming of the Kingdom, and among these words were some of extreme power and exuberance – he, who comes after me will immerse you in fire and the Spirit. immerse you in the fire like you get immersed when you jump into water, and the water is above your heads. repeatedly, completely and totally. he whom John preached would be so powerful that all the injustice would end forever.

then a carpenter in his 30s approached him. and there was this moment of light, epifany, a voice from above and the manifestation of the Holy Spirit, all in a picturesque tumult, all in one moment. and the son of God allowed himself to be immersed in the waters of the lowly river of Jordan, and rose and left. no great fire, no sudden end to all the evil ones, no ceasing of wars (or unjust taxes for that matter). the desert prophet by the river was left to his desert prophet job. proclaim the coming of the Kingdom, teach the people to stop in their tracks to the evil-land and reverse course. live your devotion.

the story goes on. and on. and then it comes to this one point. John’s life and preaching was too much for the local ruler. so John got landed in prison, with no certain hope to ever be free again. now he had been stopped on his tracks, now he had time – more than he’d ever wanted – to reconsider his life, universe and everything. and suddenly this guy Jesus did not seem so son of God. there had been no immersion into fire, no change of power, no justice dealt out. the voice from above? how about thunder. and so John, the strong desert man, the man without hypocrisy, resorts to those few men he can still trust. he sends his disciples to this new teacher with only one question: “Are you the Messiah we’ve been expecting,or should we keep looking for someone else?” (Mt. 11:13)

and here’s the unexpected. Jesus did not say “yes, I AM”. neither did he say – “no, i’m not”. instead of that he spoke of the bind who could see, the deaf who could hear, the lame who could walk and the poor who received the good news. there was just this little footnote – “God blesses those who are not offended by me”. many generations have pondered these words and come to a multitude of interpretations. i look at this story and think of how Jesus lets his work speak of itself. not because he is shy. but because he knows who he is and does not need to prove who he is. to no one, not even to John whom he calls the greatest among prophets.

all those years in desert had not prepared John for this kind of answer. we do not know what he said to his disciples when he heard the answer. but knowing his man of God personality, we can make an educated guess.

Jesus is not what we expect. he (as C.S.Lewis would put it) is not a tame lion. he comes and does as he will. Jesus points to the Kingdom of God rather than himself. because this is why he has come into history, into those little dusty towns, among the tired and poor people: to bring the Kingdom among them. to bring healing and restoration to those who cannot heal themselves.

and this is what we need now. a little bit of the Kingdom among us (and maybe, a little immersing in the fire and the Spirit would be nice, too, but of this some other time). exactly at this time, amidst the fake glitter and jingling, and hurry and depression and lack of snow. we need the Kingdom, it is vitally important that we build it.

when the commercial demons dance in the supermarkets, and the darker time of the year deprives us of vitamin D;
when there is so much hurry that we forget our own names and eternal sleep seems to be a viable option;
when the ‘facts’ of the media bleed us of all hope –

this is exactly when we need to remember those words from the gospel of Matthew – the blind see, the lame walk, the lepers are cured, the deaf hear, the dead are raised to life, and the Good News is being preached to the poor [NLT].

we do not need to wait for another. he is come as he promised of old. the Kingdom of heaven is among us wherever we practice little acts of love and kindness, wherever – whenever – we are the messengers, the ambassadors of Him who was not scared to die so that we live.

we are the ambassadors of the unexpected, faithful God, now and till the end of the world.

This site uses Akismet to reduce spam. Learn how your comment data is processed.

i was born in the past century. i tried the living fast, but i failed to die young. from all the choices of study before me, i chose linguistics and languages. i am a stranger here, on this earth, on my way to seek my eternal home. View all posts by L.T.L.